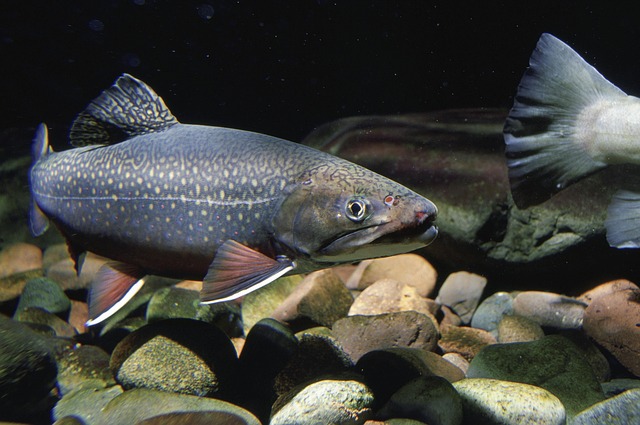 Trout is closely related to the salmon, white fish, and char. They are a native fish of the cold waters of the Northern Hemisphere. From these areas, the cold water is distributed to all over the world.

Most species live in freshwater streams and lakes. Some species migrate to the sea to feed and grow and then return to freshwater again to lay eggs or spawn. The trout has a great value as a fisherman in fishing competitions and as food.

The brown  the rainbow, and the cutthroat are the original species. The native home of the brown is the continent of Europe and the western part of  Asia. There are different species of the brown in Asia. The coastal species is known as the sea or salmon trout, and the one species that lives in freshwater is known as lake trout. The brown trout was introduced to many areas, with dark brown or black spots surrounded by pale halos.

The original habitat of the rainbow or the cutthroat is the northwestern coast of the Pacific Ocean of the North American continent. The rainbow and brown are similar in many ways. But the rainbow has a wide reddish strip along its sides, surrounded by bright green scales, which gives it a rainbow color.

Similar to the brown, rainbows have a coastal and lake species. The coastal species is nourished and grows in coastal waters and is called the American Steelhead. The rainbow has been introduced to other countries, especially in the continent of Europe, and can live in water that is higher than the original species can handle.

All of these features make the rainbow the perfect fish to be raised in farms, in which they can escape to the wild.

The cutthroat are non-migratory species, and it was named after its unique red throat. Sometimes they are introduced to European fish farms, and can be hybridized by pairing with the rainbows.

Most trout types can be found in the North American water bodies. On the other hand, there are one other species that only exist in North America, which is the brook. It is closely related to European Char and Arctic Chart, where they live in cold waters.

Brook lives in rivers, east of the North American continent along the North Atlantic coast. 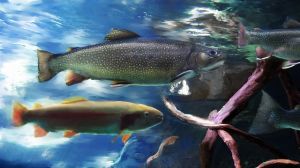 In the Europe, the brook and the brown were hybridized with the rainbow. The resulting hybrid was striped and was therefore called the tiger or zebra.

The lake trout is the largest species and lives in lakes along the US-Canada border as well as in areas south of Hudson Bay in Canada.

Arctic or European Char are found in coastal areas of the Arctic seas and rivers adjacent to those seas. They also live in the cold waters of the clear lakes of Britain, Ireland, the Scandinavian countries and the northern parts of what was formerly known as the Soviet Union.

Most trout lay their eggs in rivers, but some lay eggs in lakes with gravel, flowing water, during spring or fall.

The egg-laying behavior of rainbows is an example of laying eggs in all species. In the early spring, it moves towards the upper areas of the river to lay its eggs. The female chooses the appropriate location, usually a shallow place with many gravel at the beginning of the stretch of water.

And there lies the female on her side and move her tail up and down digging a nest in the gravel called the redds. The female then lays on the nest and the male starts to flirt with her by swimming next to her.

When it is time for the female to lay her eggs, she moves to the bottom of the gravel where her stomach presses on the gravel, while the male remains very close to her. At the same time as the female puts eggs, the male ejaculates with semen as the eggs are fertilized. The female then covers fertilized eggs with gravel. The eggs hatch in about two months, where the young (fry) go out through the gravel into the water.

Small trout mainly eat invertebrates, including insects, while adult trout feed on other fish and lobsters. They may also eat small birds, lizards and other animals that may fall into the water. The trout varies from one species to another. While rainbows live for up to 11 years, the lake trout lasts at least 25 years.

All types of trout are of very high in value in the sport of fishing, especially the rainbows and the cutthrought for its fierce resistance and jumps. The brook is also a highly resistant fish when it gets hooked, and is therefore also a favorite fish for fishing enthusiasts. The lake trout is usually fished by trolling or ice fishing.

Some types of trout are of high economic value as food. Commercial fishing usually fish huge amounts of steelhead and lake trouts, while rainbows are farmed fished.